What is Animal Healing?

Animal healing is a non-invasive complementary therapy, suitable for a wide range of physical and emotional conditions.  It can also work very well alongside manual therapies (for example, physiotherapy) and in conjunction with on-going veterinary treatment.

Healing does not provide a diagnosis and veterinary consent must be obtained before treatment commences.

How can it help?

Animal healing is beneficial for all chronic and acute conditions, injuries and illnesses, and works very well in resolving behavioural problems, when used in conjunction with re-training.  Animal healing is not a cure, and should never be used as a substitute for veterinary care.  If your animal has been injured or is unwell, it should receive immediate veterinary attention.

How does healing work?

An animal’s body is made up of tiny atoms vibrating at specific frequencies.  The body has an innate knowledge of the frequency of theses vibrations for the maintenance of its health.

When an animal is injured or diseased, the effects of domestication and environmental stress often prevent animals from utilising their own natural healing processes.

When this happens, the ‘trauma’ from the illness or injury becomes stored within the body as an energetic blockage, and the healthy frequencies become disrupted, preventing the animal from returning to a balanced healthy status, called ‘homeostasis’.

In some cases, repeated trauma can lead to chronic disease and a lack of well-being.

When healing energy is offered to the animal, it enables the body to raise and rebalance its frequencies, and increase its natural energy resources.  Healing allows the trauma to disperse, and can assist in speeding up the recovery from illness, wounds and operation sites, saving time and money, and reducing further stress on the animal.  It is particularly useful for animals that have to be confined, for example, on box rest, kennels, or within a cage.

During the healing, the animal may go into a deep state of relaxation, and afterwards it may sleep more than usual, as its body lets go of trauma.

Jak the Terrier after a healing session.

Healing also provides the support for animals to process and release emotional trauma that can be caused by fear, anxiety, stress or separation.

For example, in a wild situation, if the flight or fight response is triggered by an attack from another animal, once the threat has subsided, the animal can retreat into the safety of its herd or pack where it can safely disperse the adrenalin and cortisone from its bloodstream.

In domestication, animals cannot behave in their natural way, and so they have to adapt and often compensate by absorbing stress within their bodies.

Over time, unresolved stress can lead to behavioural difficulties, such as defensiveness,  nervousness, agression,over-excitability, and withdrawal.

In the same way as it works for injury and illness, healing allows the animal to let go of unresolved stress, and return to a balanced state. It is even more effective if used in conjunction with re-training, so that the animal can learn new responses to help it cope.

It is also very beneficial for bereavement and also brings peace for animals about to pass on.

For more information about scientific research into the benefits of healing, please see my resources page.

As a trained animal healer, I am able to detect energetic blockages within the energy field of an animal and by channelling universal energy, allow the blockages to be cleared.

It works in much the same way as a radio antennae picks up electromagnetic waves. Or imagine walking into a room and sensing a ‘vibe’. Everyone is capable of detecting frequencies; it just takes a lot more practice to work in detail with them.

Toto the horse, positioning herself for me to work around her head.

I can work in close proximity to the animal, or from outside a stable or kennel for example. I always put the needs of the animal first, when deciding how best to perform a treatment.

I always carry out a detailed consultation of your pet’s history and lifetsyle, and keep detailed notes on their progress.  It is very important to try and establish the cause of the problem and resolve it, otherwise healing will only have a short term effect.

How do animals react to healing?

Most animals go into a state of deep relaxation. There may be yawning, twitching, and postural stretches.  However it is not uncommon for them to move around and some will be restless. 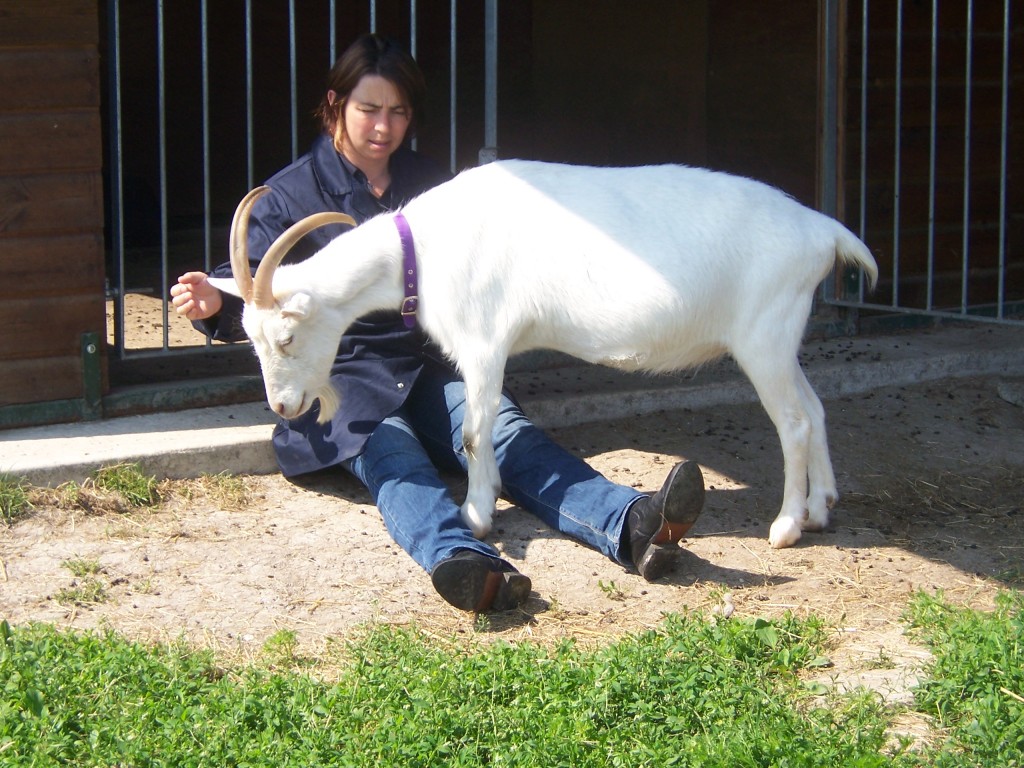 Snowy the goat, who positioned herself in front of me for healing, and then went into a deep relaxation.

Afterwards, they may drink more, and need prolonged sleep.

As the blockage releases, symptoms can sometimes become more pronounced before they start to improve, however this is an indication that the body is in fact letting go of the trauma that it stored at the time of the injury, illness or trauma.

They may require more time alone in the days after a healing session in order to process the effects of the healing.  It is advisable to continue with their normal routine, but try to avoid any stressful or exciting events.

Here are some examples of animal healing, from animals I have treated: 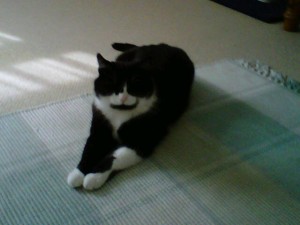 Sam, a six year old cat who was rehomed from a rescue home, developed idiopathic cystitis. Despite receiving ongoing expert veterinary care, Sam’s condition continued to re-occur, and it was thought that stress was the main cause.  I discussed Sam’s diet and lifestyle with his owner, and it was clear she was doing all she could to reduce his stress and provide the best nutrition.  I gave Sam a series of five weekly healing sessions, during which he released a lot of trauma and was able to ground and rebalance himself.  We did not know about his past, but rescue and rehoming is very stressful for an animal, and in Sams’ case, he was also very sensitive.  The healing enabled him to move on and settle in his new home, and end the trauma cycle, which no doubt played a part in triggering the cystitis attacks.  Sam made a steady improvement, gradually showing less and less symptoms, and since a short while after the treatments finished, he has been sympton free.

His owner has subsequently moved house, and with additional healing sessions to support him, Sam has also made the move without a cystitis attack.

Archie, a nine year old Parson Russell, had been owned since he was a puppy. When his owner acquired Hetty, a 4 month old Parson Russell terrier,  initially they became the best of friends, however Hetty showed signs of nervousness.  They lived happily together for 18 months until rivalry developed and sadly after a nasty fight in which Archie sustained wounds, the two dogs had to be separated at all times for their safety.  Archie received veterinary care for his wounds and his owner sought  behavioural advice, and attended a weekly training group with both dogs, however the situation did not improve, and the owner was now desperate and  considering rehoming Hetty, who had also become increasingly nervous of strangers.

I gave healing to Hetty and Archie at the same time, and over a course of six treatments, both dogs were able to process the traumas that they had taken on. 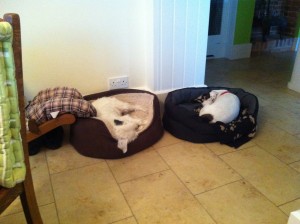 Hetty and Archy, asleep in their respective beds following a joint healing session.

Archie released a lot of blocked energy from around the sites of his wounds and began to feel more secure, and for Hetty it was a process of supporting her as she began to develop a proper sense of herself and increase her confidence. Hetty’s chakras were very unbalanced and she was not grounded, and she had cut herself of from her body. She blossomed into a very confident dog, and by giving healing to both dogs at the same time, their relationship repaired and became cemented, and they returned to being members of a happy family.

Rollo, an eight year old fjord pony, had become reluctant to be schooled and whilst in the schooling arena, he would stop as if he needed to urinate, but then not be able to ‘go’.  His owner was worried and frustrated.  His vet diagnosed back pain and in conjuction with physiotherapy, I gave Rollo five healing treatments.  Rollo was also very nervous of new experiences and his owner felt that his initial training as a youngster had been rushed which had left him lacking confidence in himself and very reactive to unfamiliar things.  The physiotherapy worked very well to release the muscular tension in Rollo’s back and each time I gave healing to him, he went into a deep state of relaxation.  I believe that the two therapies worked very well together, because Rollo made a rapid recovery, and returned to his work with a lot more confidence, and the ability to process new experiences from a much calmer perspective. 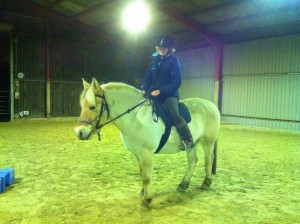 Rollo, happy to be ridden again.

The animal healing allowed Rollo to let go of stored trauma in his body, which had undoubtedly built up over time to create the physical and emotional problems he was having.  As well as his confidence growing, his physical appearance changed from having a dull coat, to a very bright and shiny little horse!